Given my intense relationship with this specific standardized test–an exam that has forever altered the course of my life–this was a particularly unsettling moment for me. As an authentic assessment activist, I had helped organize a boycott of this test at Seattle’s Garfield High School, I edited the book More Than a Score to tell the story of this movement against the MAP and the subsequent uprising against high-stakes testing, and I speak regularly around the country to share the lessons of the movement to “Scrap the MAP.”

I had long been committed to a fight for public education, but now it just got personal. Now they were trying confine my own boundlessly vibrant son into a test score bubble.

I had felt a great sense of accomplishment in our 2013 MAP test boycott, which resulted in a decisive victory when the superintendent ended the school year by announcing an end to the MAP test requirement for the high schools.  Now, however, the announcement that it was MAP test week for my son felt a cruel irony. It was hard to have to face the fact that, despite how powerful our movement had become, we hadn’t defeated the test altogether and elementary school students were still being subjected to it.

The idea that our school system implements standardized testing in the early grades to make students “career and college ready” (in the language of the Common Core standards) is an utter absurdity–especially when you consider that one of the most popular career choices for a 5-year-old is being Spider Man.  And yet high-stakes are attached to the the MAP test–already in kindergarten!–using it as an arbitrator of who will be placed on the advanced track.  In schools around the nation, there is an astonishing proliferation of the use of standardized testing in the early grades, which is having a frightening impact our our children. Children are increasingly experiencing severe stress from these tests, to the point where administrators now have a protocol for what to do when a child throws up on a test booklet–something that comedian John Oliver highlighted on his program Last Week Tonight when he said, “Something is wrong with our system when we just assume a certain number of students will vomit.” As a recent report from Defending the Early Years points out kindergarten literacy standard will simply crush the spirits of the late bloomers, linking school with “feelings of inadequacy, anxiety, and confusion.” 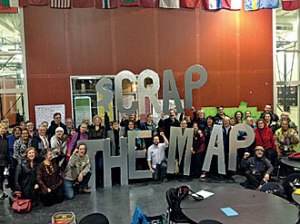 The new Common Core standards, and the tests meant to measure student’s progress toward them of them, are dramatically developmentally inappropriate and punish the students for developing in different ways and at different rates. As Nancy Carlsson-Paige, professor emeritus of early-childhood education at Lesley University and a senior adviser for Defending the Early Years, wrote in the book, More Than a Score,

When the Common Core State Standards (CCSS) came out, many of us in early childhood were alarmed. There had not been one K-3 classroom teacher or early childhood professional on the committees that wrote and reviewed the CCSS. We could see that the standards conflicted with the research in cognitive science, neuroscience and child development that tell us what and how young children learn and how best to teach them. The pressure on young children to learn specific facts or skills increased, even though these expectations are unrealistic, inappropriate, and not based in research or principles of child development.

Moreover, young kids often struggle with the basic mechanics of answering questions on the new computer administered tests.  As one Seattle elementary teacher wrote about Common Core testing this year,

Our school does not have a technology teacher and not all students have computer access at home, so many students have not learned computer or keyboarding skills. I watched more than one student hitting the space bar over and over because they did not know how to go down to the next line to start a new paragraph.

These tests have led to drastic cuts in recess, arts, music, physical education, and other critical components to a robust education of the whole child–and this is especially true in schools the serve predominantly low income and students of color, as our education system has become singularly obsessed with “raising achievement.”  Again, Professor Carlsson-Paige:

Young children learn actively through hands-on experiences in the real world. They need to engage in active, playful learning, to explore and question and solve real problems. As children do this, they build concepts that create the foundation for later academic success. And perhaps even more importantly, through active, play-based, experiential learning, children develop a whole range of capabilities that will contribute to success in school and life: problem solving skills, thinking for themselves, using imagination, inventing new ideas, learning social, emotional, and self regulation skills. None of these capabilities can be tested but they are life-shaping attributes that are ready to develop in the early years.

And as the Harvard developmental psychologist Howard Gardner pointed out in a Boston Globe Globe article titled, “Is the Common Core Killing Kindergarten”, “Overuse of didactic instruction and testing cuts off children’s initiative, curiosity, and imagination, limiting their engagement in school.”

For these reasons, and due to the bitter struggle we waged during the 2013 boycott, the MAP test is practically a cuss word in my household.  So when I asked my son if he wanted to take the MAP, it should be no surprise that he told me he was against taking it.  He had obviously been paying close attention to this mass uprising against standardized testing, because he replied,  “I take the tests my teachers makes, but not one that someone who doesn’t know me makes.”

With that, we wrote him an opt out letter, and my son joined the movement. Several other families opted their kids out of the test as well, and the parents took turns helping to provide alternative activities for the kids during the the test.

My son was especially thrilled to go to school the day he was going to help teach a lesson to his fellow five and six-year-old dissidents during the opt out period.  His idea for the lesson was for a parent to read a book to the students about Satchel Paige, the legendary Negro League pitcher, and then they would make baseball cards of their own, complete with the stats on the back. Miles brought the sports page in, as well, to help them with the stats and to show them how to read a box score. My son opened the lesson by telling everyone about the Negro Leagues, a league started by Black people when the Major Leagues wouldn’t let them play, and then the parent read the book. However, before they could get to the baseball card activity, the rest of the class returned from MAP testing early, unable to actually take the test because of a glitch in the computer program. His class had lost the morning of instruction. 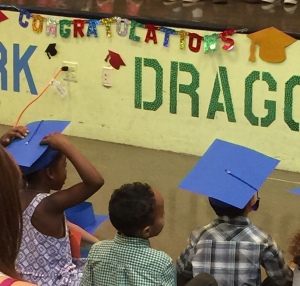 On the day the test was rescheduled, the students who opted out helped to make hats for the end of the year promotion ceremony to mark their passage to first grade.  I asked my son what he thought of his experience opting out of the test.  He said, “It was fun.  I got to teach my friends about something, and we got to make our graduation hats…I didn’t have to worry if I was going to fail.”

I can tell you kindergarteners never looked better in mortarboard caps then when they wore them at their joyous promotion ceremony this week.  Maybe next time they will decorate them with the slogan, “Scrap the MAP!”?

14 thoughts on “Scrap the MAP Test: My Kindergartener Joins the Opt Out Movement!”