Jesse’s commentary on education, U.S. politics, and foreign affairs have been featured on many local and national media outlets.

Jesse’s has been quoted or featured in many print media outlets, including: The New York Times, The Wall Street Journal, Education Week, The Seattle Times, The Seattle Weekly, The Stranger, The International Socialist Review, YES! magazine. 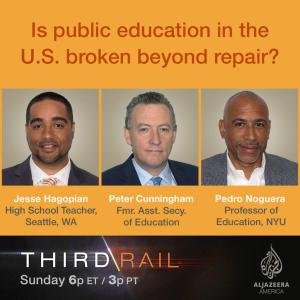 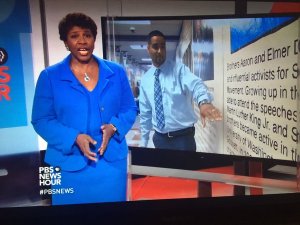 At a school with a history of social protest, this teacher is leading an opposition to ‘excessive testing’

Gwen Ifill and the PBS News Hour crew interviewed Jesse Hagopian to ask him about how standardized testing is eroding education and why we are in the midst of the largest uprising against high-stakes testing in U.S. History.

In January, 2013 Garfield High School announced it would refuse to administer the MAP test.  The struggle for quality assessment soon became a national story.  Here is an early appearance Jesse made on CNN.

Here is the preview for the Dan Rather Reports show Jesse appeared on to talk about Garfield High School’s opposition to the MAP test.

Published November 30, 2011 by Deborah Menkart
Seattle’s Garfield High School teacher Jesse Hagopian was arrested during an “Occupy the Capitol” protest last week about school funding. In response, 500 students at Garfield walked out and have been organizing ever since.