Below are a selection of Jesse Hagopian’s commentaries on wide ranging issues related to domestic politics, social movements, race and Labor struggles.

Published on Saturday, November 10, 2012 by Common Dreams I’m Black and I Want More “Stuff” and “Things”: An Open Letter to Bill O’Reilly

On election night, as it became increasingly clear that Mitt Romney was going to lose the election to Barack Obama, I watched Fox News host Megyn Kelly ask you, “How do you think we got to this point?”

The Chicago Teachers Union strike marks the beginning of a rollback for 40 years of neoliberal interference in public education and hearkens to teachers’ struggles in the beginning of the last century.

This year instead of asking for very little and receiving even less, Blacks, Hispanics, women, youth, and all working people should demand the things that we have already paid for with our taxes, but—because of endless wars, bank bailouts, and corporate welfare—have yet to receive:

Obama has ‘neglected’ people of color 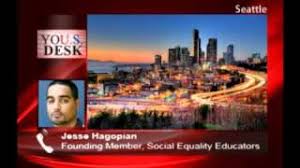 “This government is guilty of not taking care of the troops after they come home. We are hoping to show this nation how broken the Veterans Administration is. We want to make this a responsive and efficient system.”