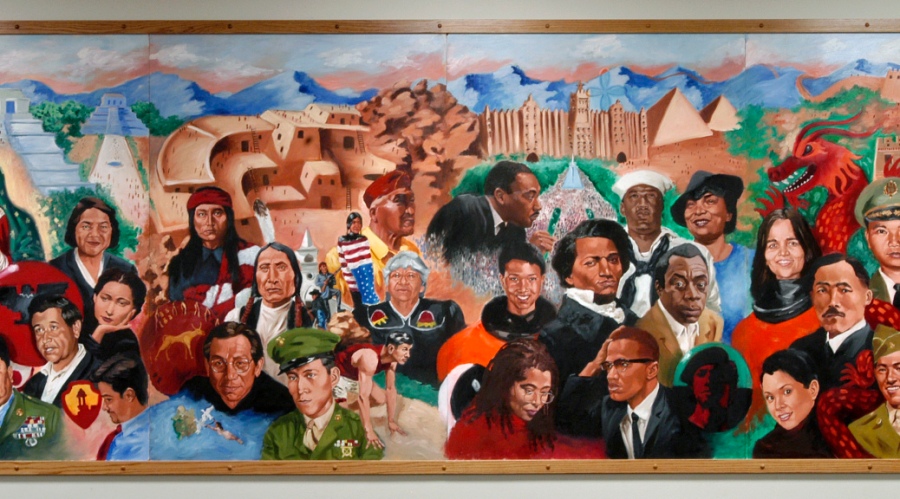 The below article highlights the work of several educators in Seattle including Tracy Gill, one of the lead organizers of the movement for Ethnic Studies, and Donte Felder,  head teacher at Orca K-8, who are piloting the new program.

My classroom is also featured, the first standalone Ethnic Studies class in the Seattle Public Schools.  Teaching this class has truly been my best year in the classroom.  I have drawn from The University of California, Berkley’s definition of Ethnic Studies to engage students in,

The critical and interdisciplinary study of race, ethnicity, and indigeneity with a focus on the experiences and perspectives of people of color within and beyond the United States. Since the emergence of ethnic studies as an academic field in the late 1960s, scholars have analyzed the ways in which race and racism have been, and continue to be, powerful social, cultural, and political forces and their connections to other axes of stratification, including gender, class, sexuality, and legal status.

This approach has led to some of the most dynamic discussions I have ever had in the classroom about race, ethnicity, identity, and intersectional movements for social change.  With hate crimes on the rise and racist rhetoric and policies spewing out of the White House on a regular basis, these conversations are desperately needed. This movement won’t stop until every student in the Seattle Public Schools has the opportunity to take an Ethnic Studies class; Knowledge of self is a human right!

Ethnic Studies: A Movement Toward Equity
Posted by Seattle Public Schools on 05/11/2018

Ethnic Studies: A Movement Toward Equity

In Jesse Hagopian’s multigrade classroom at Garfield High School, students are learning about U.S. History as time travelers. They close their eyes at the sound of a DeLorean playing over the projector and engines whirring, they are transported to 1964. At once, they are immersed in the experiences of young leaders in the Student Non-Violent Coordinating Committee (S.N.C.C.). Students are asked to role-play, using historical evidence, and imagine themselves as freedom riders, writing letters back home to their families. Through the lesson, students are encouraged to find connections between the role of young people in the civil rights movement and the contributions of young people in the world today.

The class is ethnic studies. It’s part of a pilot being rolled out in six schools across the district aimed at engaging students in perspectives of historically marginalized groups.

In the summer of 2017, the Seattle School Board passed a resolution encouraging, “departments, schools and staff to increase their efforts to expand and improve ethnic studies for all students in the Seattle Public Schools.” The formal expression came after a resolution and tremendous community support from the Seattle Chapter of the National Association for the Advancement of Colored People (NAACP), Seattle Education Association (SEA), Seattle Public Schools educators and various community partners.

Hagopian’s class is the first ethnic studies course offered for students as a result of the resolution. To provide context for student’s learning, Hagopian began the semester with dialogue about the history of ethnic studies; the emphasis on engaging students in ways they know and understand, utilizing systemic critiques of oppression and applying critical consciousness. On any given day in the ethnic studies course, students are critically analyzing historical events through a multidisciplinary lens.

Seattle Public Schools educators have long known about the importance of the field of ethnic studies and with the introduction of the board resolution, were able to formally integrate curriculum into their classrooms. About 35 teachers committed to piloting ethnic studies core content, with six official pilot schools in the spring semester:

Teachers participating in the pilot check in with each other regularly about the implementation and success at each of their buildings. Application of the curriculum differs based on grade levels and across schools.

At Orca K-8, students are creating connections across disciplines as Ethnic Studies is integrated in a variety of subjects. Science educator, Zelda Padmananbhan lead her class through a lesson on cells through a discussion of the HeLa cell line, the first immortalized cell line and one of the most important cell lines in medical research, sourced from Henrietta Lacks, an African-American woman who did not grant permission for her cells to be used. Through a unique opportunity, students examined the official HeLa cells, read literature and watched portions of a movie about Lacks’ life.

Across the school, young learners are creating storied quilts, analyzing race through the production of a musical and practicing their oratory skills through original speeches about relevant social justice issues.

Donte Felder, head teacher at Orca K-8, speaks to the impact of learning about rich and complex histories, “Ethnic studies will provide teachers, parents and students a space to engage in challenging and courageous discourse around race and classism, gender and ethnic stereotypes, but more importantly, it will provide students with complex narratives with themes of perseverance and hope that will speak to all of our students.”

Listening to the Youth

The Seattle Public Schools Ethnic Studies Task Force defined the field as aiming to “empower all students by making the curriculum relevant to their lives, background and circumstance.”

Sixth-grade scholars in Tracy Gill’s social studies classroom at Denny International Middle School participated in the spring ethnic studies pilot. When prompted to answer about the value of studying ethnic studies after her involvement, student Karla answered, “It gives students of color a chance to see powerful people like them through history and not feel oppressed by what they are learning. When students are taught ethnic studies, they know that someone like them worked hard and made a change in history…This has made me feel like I belong because I know more about people like me.”

Sixth-grade student Noah shared his thoughts about the potential impact on teacher practice, “I think teachers should be taught more about ethnic studies because teachers are learning, then passing on that knowledge onto kids. My evidence to support that is, my teacher is always learning new things at her teacher trainings and passing that information on to us.”

The Impact on Learning

There is emerging research that demonstrates that a well-designed program of ethnic studies, whether incorporated into existing courses or as independent courses, helps improve literacy skills, attitudes toward learning and overall engagement in academic studies in students of color.

“As an ethnic studies student who learned the history of my community and those of others who were disenfranchised, I found a pathway to working for a more socially just world,” explains Kyle Kinoshita, chief of Curriculum, Assessment and Instruction for Seattle Public Schools. “In doing so, I found a strong and confident identity.”

Curricula that are relevant to the life experience of students from diverse backgrounds have been shown to have a positive impact on the development of a strong identity connected to achievement. As an administrator, Kinoshita sees the same transformation in today’s students of color whose teachers root them in the tradition of resilience and liberation against social and racial injustice. He says, “We owe all students these opportunities, and that’s why we won’t stop until ethnic studies is a basic component of the curriculum in Seattle Public Schools.”

The Ethnic Studies Working Group will begin the process in June 2018 of collaborating with Seattle Public Schools educators as they write curriculum for courses and grade levels, starting with secondary social studies. Looking toward the future, the group plans for a quality review of written curriculum, professional development, implementation and potential district adoption.

Read more about how Seattle is working to eliminate opportunity gaps.

2 thoughts on “Ethnic Studies In Seattle: A look inside the classrooms of antiracist educators”