Last weekend I spoke to packed audiences on my book tour for More Than A Score: The New Uprising Against High Stakes Testing in Milwaukee, WI for the Educator’s Network for Social Justice conference, the Network for Public Education (NPE) Conference in Chicago, and to the Chicago Teachers’ Union.

My presentations during the weekend focused on making clear the connection between the growing opt-out of standardized testing movement for justice in public education and the Black Lives Matter movement. Throughout the weekend, I talked about the growing numbers of Black leaders in the opt out movement (such as Chicago Teachers’ Union president Karen Lewis and students in the Baltimore Algebra Project and the Newark Student Union), outlined the history of standardized tests having been created by eugenicists, and discussed the Black scholars such as W.E.B Du Bois who were some of the first opponents of standardized testing.

I was particularly excited to present at the NPE Conference along side Rita Green, the Education Chair of the Seattle/King County NAACP.  We gave a jam-packed room entitled, “More Than a Score: Black Lives Matter!”  This meeting was kicked off by Rita Green who announced that she would work to connect NAACP chapters nationwide to education justice organizing and the opt out of high-stakes testing movement (a copy of the statement by the Seattle/King County NAACP is available here). I then spoke about the rising influence and overlap of the Black Lives Matter movement and the opt out movement. As education blogger Chris Thinnes wrote, “Jesse Hagopian asked in what I found the single most compelling question I’ve heard, and internalized, in recent weeks: “Could you imagine the power we’d have if these two movements found common cause…?”
Watch the edited video of our presentation, More Than A Score: Black Students Lives Matter here: 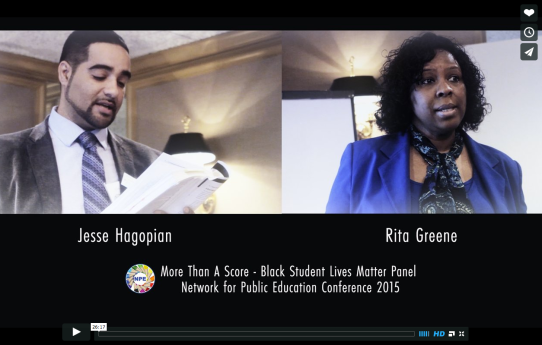 And see the video of the powerful discussion that followed the presentation: 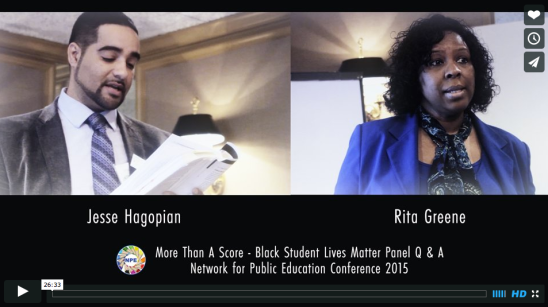 2 thoughts on “Black Student Lives Are More Than a Score! (Video)”