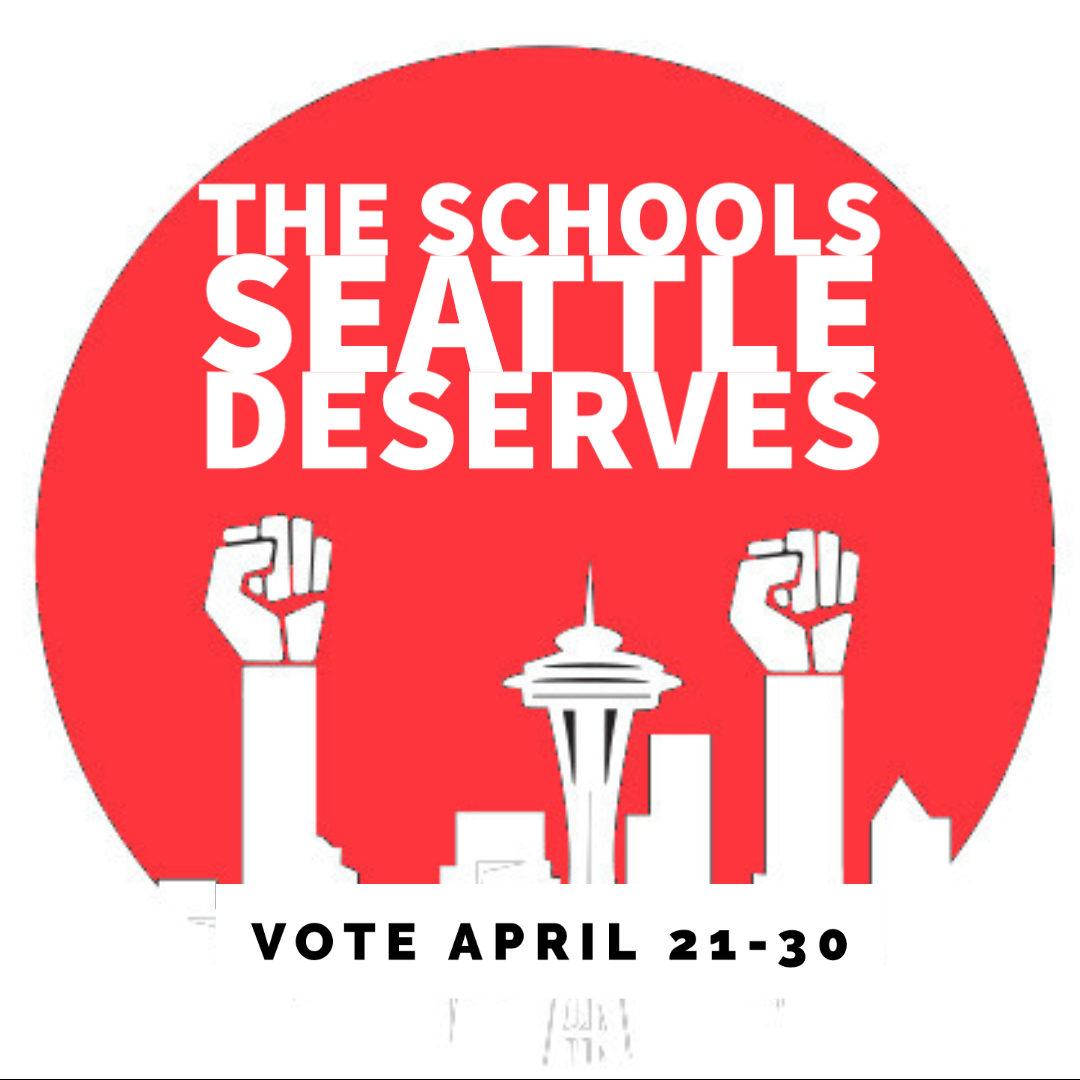 I’m excited to announce that a powerful coalition of educators has come together to launch the “Schools Seattle Deserves” (SSD) slate of candidates in the Seattle Education Association union election that begins on Tuesday, April 21 and ends on April 30th.

I fully endorse this slate of candidates and urge all members of the SEA to vote in the election for these visionary education leaders. SSD is running on a three pillar platform that includes: Racial equity, fully-funded public schools, and the empowerment of members (see an outline of each of these issues in the press release below).

The SSD is holding an important press conference via Zoom on Tuesday, April 21st 2020 at 4:00 PM Pacific Time that I encourage everyone to join and hear directly from the members of the slate themselves (more details on joining the press conference below).

This coalition is made up of candidates from the Social Equity Educators (SEE, the organization that I have organized with for a long time), Ethnic Studies Advisory Group, Racial Equity Teams, Black Lives Matter at School Advisory Board, Bargaining for the Common Good, Sound Housing Alliance and SEA members from Building Leadership Teams across the District.

Three social justice warriors that I have worked with for a long time are running for the officer positions, along with a powerful group of educators running for positions on the executive board. Jon Greenberg is running for president of the SEA, Vallerie Fisher is running for treasurer, and Marquita Prinzing for Director of the Center for Racial Equity (CRE).

Jon Greenberg is an award-winning public high school teacher and writer whose work has been featured in Everyday Feminism, NPR, The Huffington Post, Teaching Tolerance, and Yes! Magazine. Creator and facilitator of the curriculum once named Citizenship and Social Justice, he has dedicated his career to social justice and civic engagement for nearly 20 years, including working to ensure ethnic studies is taught throughout Seattle schools and beyond. As well, Jon has worked to help launch racial justice youth organizations that have done amazing work in Seattle.

Vallerie Fisher, who is running for reelection as treasure, has been been a Family Support Worker in the schools and social justice union organizers for many years. When she won her position as treasure of SEA she became the first Education Support Professional to ever hold an officer position in the union. Vallerie is an active member of the Seattle chapter of Coalition of The Black Trade Union (CBTU), serves on the Washington Education Association (WEA) Board of Directors, and is the WEA Black Caucus as chairperson.

Marquita Prinzing currently serves as the Director of the Center for Racial Equity. She worked as an elementary school teacher for years before that and has been a leader in the Black Lives Matter at School movement. As the Driector of the CRE she has helped organize the Racial Equity Coaches Program that conducts training for educators around Seattle.

SEA has taken important steps forward in the last few years to become more of an advocate for social justice issues, but should the SSD slate win, it will represent a watershed moment in the history of our union and education in Seattle.

In recent years, educators around the country have shown the power of building alliances with parents, students, and community organizations to fight for community schools and a broad range of social justice issues. In places like Los Angeles and Chicago, the educator unions there have waged contract campaigns that include demands for affordable housing, getting police to stop random searches of students, implementing antiracist curriculum, a nurse in every school, a legal fund for undocumented students, and more.

If the Schools Seattle Deserves wins this election it will be a new opportunity to win a nurse in every school building in Seattle, confront the criminalization of youth in schools, eliminate high stakes testing, and so much more.

Get ready for a whole new era of social justice unionism

Here, then is the press release announcing this historic moment for our union.

Who: The Schools Seattle Deserves is a coalition of social and racial justice educators who are members of the Seattle Education Association

What: Press conference to announce the Schools Seattle Deserves slate of candidates in the upcoming SEA election, including for president and officer position. The election will be held from April 21st through April 30th.

When:  The press conference will be held on Tuesday, April 21st at 4:00pm

Where: Due to the necessity for social distancing in this time of COVID-19, we are holding the press conference online via Zoom.  You can join the Zoom conference at:

Seattle, WA, April 15, 2020—A coalition of social and racial justice educators called, “The Schools Seattle Deserves” (SSD) has launched its campaign for a new slate of social justice educators to run for office in the upcoming election of the Seattle Education Association (SEA). SSD will be running candidates for the officer positions and the executive board, including Jon Greenberg for President, Vallerie Fisher for Treasurer, and Marquita Prinzing for Director of the Center for Racial Equity (CRE).

The SSD slate has already been endorsed by:

Jon Greenberg, an Ethnic Studies teacher at The Center School, said, “I’m running for SEA president to center racial justice, fight for fully-funded and safe schools, and hold the district accountable to its own rhetoric and policies.” He went on to say, “With 20 years of SPS and SEA experience, I know that a stronger, empowered union community is the clearest pathway to achieve these goals.”  Jon Greenberg has been a longtime advocate for racial justice in education and serves as the youth coordinator for an equity-focused youth council.

The SEA is one of the largest unions in Seattle and represents some 5,000 educators, including teachers, Instructional Assistants, Educational Support Professionals (ESPs), family support workers, office professionals, nurses, librarians, and more.

As a family support worker Vallerie Fisher said, “I am running for re-election to the Seattle Education Association as Treasurer because I believe that inclusion is vital and as an ESP I/We have not always felt included or that our voices mattered in SEA Governance before I decided to run becoming the first ESP to be elected to SEA Governance”.

Marquita Prinzing, the current director of the CRE, spoke of her decision to run for reelection and her strong record of promoting educational equity saying, “By listening to educators, especially educators fighting for racial equity in their classroom, schools, and in the system, we created a program called ‘Racial Equity Coaches,’ a team of educators who mentor and advise the Racial Equity Teams…”

The Schools Seattle Deserves is comprised of SEA educators who have done some of the most dynamic work in the union for years, including working with: Ethnic Studies Advisory Group, Racial Equity Teams, Social Equity Educators, Black Lives Matter at School Advisory Board, Bargaining for the Common Good, Sound Housing Alliance and Building Leadership Teams across the District.

The Schools Seattle Deserves is running on the following 3-point platform of campaign issues:

3) Empowerment of Our Union Community

The full slate of candidates of the Schools Seattle Deserves includes the following educators:

Amanda Hubbard explained her decision to run for an elementary executive board position with “Schools Seattle Deserves” coalition, saying, “I am an educator of color, passionately invested in ensuring healthy and safe school environments for our students and educators…If you don’t know me yet, I believe in Racial Equity, fully-funded public schools, and the empowerment of our union community.” Emphasizing her priorities for the union, Hubbard continued, “In this role I would continue our fight for Ethnic Studies, Anti-Racist teaching, and recruiting and retaining educators of color.”

Seattle Teacher Jesse Hagopian said, “The Schools Seattle Deserves is a remarkable coalition of educators—many of whom I have worked with for a long time—who know that the Seattle Education Association could join educator unions such as those in Los Angeles and Chicago in being a leading force for social justice.  Our cities’ educators and students will have a new champion for equitable education when the SSD slate is elected!”

Longtime Washington State education advocate Rita Green said, “Seattle Teachers needs a board that will work for the best interest of teachers, staff and students and the community. I’ve worked with many of the ‘Schools Seattle Deserves’ candidates on various committees and believe that all possess the skills that are needed to be able to work in the best interest of students and staff, while holding the school district accountable. SEA will have leadership that will help SPS move in a positive direction to improve educational outcomes for ALL students.”