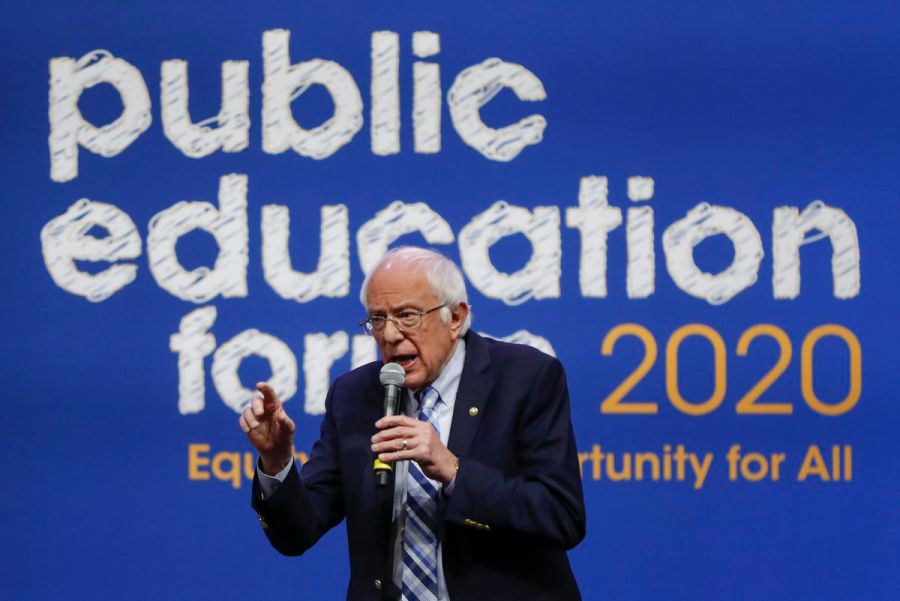 I have spent my entire adult life as a teacher and organizer in support of educational justice, racial justice, and other movements for social justice—from building teacher’s union struggles to better fund our schools, to the antiwar movement, to Occupy Wall Street, to the struggle for marriage equality, to immigrant rights, the Black Lives Matter at School movement, and beyond.  Through participating in these struggles I have seen firsthand how the political and economic system of capitalism, which allows billionaires to horde the wealth that the rest of us create, is at the root of so many problems we face.

Today, Bernie Sanders and his grassroots campaign calling for a “political revolution against the billionaire class” represents the next phase of a breathtaking resistance to corporate power that is at the root of the social inequities I have spent my life organizing against.  But it isn’t just Bernie’s naming unfettered capitalism as the source of our problems that excites me about his campaign.  It has also been his specific commitments to educational and racial justice—as well as his call for system change and democratic socialism—that has inspired me to embrace his candidacy for president.

I began my teaching career in the Washington, D.C., public schools in 2001.  Everyday, I would drive past the halls of government and the White House, cross the Anacostia River, and enter into South East D.C., one of the most impoverished and segregated neighborhoods in America.

Only days after I began teaching, the terrorist attacks of 9/11 struck the Pentagon, and we could see the smoke rising from my fifth-grade classroom window. We also witnessed the government appropriate many billions of dollars to bomb people in the Middle East and launch a war that has yet to end—and which expanded to the disastrous war in Iraq and numerous other bombing campaigns in the Middle East.

Yet as horrifying as that day was, it wasn’t the only disturbing experience for my students that month.  A few days later, the first research project I ever assigned came due.  The students arrived at school with their homemade posters, artwork that illustrated the lives of people throughout history who had contributed to social change. We were planning to present the projects the following day, but when we arrived at school the following morning we discovered that all the posters had been destroyed.  Unbeknownst to me, there was a hole in the ceiling of my classroom and it had rained overnight, completely waterlogging their posters, and leaving pools of water on floor.

I learned something from that experience that has stayed with me all these years: Our government is able to mobilize an untold fortune to go bomb people and children all over the world, yet refused to find the resources to fix that hole in the ceiling of my classroom—right in the shadow of the White House.

After three years of teaching in Washington, D.C., I moved back to my hometown of Seattle and I began teaching middle school. After a couple years of teaching, the Great Recession of 2008 struck the economy and I was laid off, along with hundreds of other teachers in Seattle, and thousands more around the country.  In the aftermath of the Great Recession, I learned another vital lesson: Our government will take great care to nurture and support investment bankers and insurance companies, and yet disdains and disrespects America’s children (and their educators) in the public schools.

These harsh lessons have led me to support the unprecedented campaign of Bernie Sanders for president. Sen. Sanders has been speaking out against wars throughout his life, wars that have depleted the funding we need to improve our public schools.  He’s been working to hold Wall Street accountable and to wrestle the wealth out of the hands of the richest 1 percent and use that money for the common good.

Moreover, Sanders’ “Thurgood Marshal Plan for Public Education” would transform the lives of my students, their families, and millions of educators around the country.

His call for free college admission to public universities would mean that many brilliant students I have taught, who had the motivation but not the means, would gain access to higher education. Additionally, Bernie calls for canceling the entire $1.6 trillion of student loan debt in America.

Sanders’ call to forthrightly confront school segregation and institutional racism in education is part of a movement to systematically dismantle the school-to-prison-pipeline.  Bernie’s education plan calls for ending the disproportionate disciplining of Black and Brown students, hiring more Black teachers, enforcing the Civil Rights Act and its mandate for desegregation, and committing some $5 billion to community schools that provide wraparound services.

“High-stakes testing has also robbed many students of a holistic educational experience and the joys of learning. Subjects not included in federal and state testing mandates, such as art and music, have been cut despite the wealth of evidence that they increase academic performance and social-emotional well-being. These cuts have not been distributed equally; students of color have seen the sharpest drops in arts education. The most serious flaw of high-stakes testing, however, is that it ignores the real problems facing our teachers and students: social inequality and underinvestment in our schools.”

From Bernie’s call to halt school privatization by placing a moratorium on federal funding for charter schools, to his pledge to pass the Student Non-Discrimination Act into law that protects the rights of LGBTQ students, as well as his commitment to significantly increasing teacher pay and working to set a starting salary for teachers at no less than $60,000, demonstrates that he is clearly the candidate that students, educators and families need in this era of profound inequality.

And perhaps the most important plank of his education plan is to triple the funding for Title I schools that serve students in poverty.

This is the funding that would have fixed the hole in the ceiling of my classroom.

Bernie Sanders knows that when we invest in public education we can also fix the hole in the very soul of America.

Yet the most important aspect of Sanders’ campaign isn’t any one specific policy position. The real significance of Bernie’s vision is his motto, “Not Me, Us,” which hammers home his understanding that power for working people isn’t derived from any one candidate, but rather through social movements organizing for change.  It explains why he has wholeheartedly supported the educators who have gone on strike around the country.

Speaking at a rally in Chicago for their striking teachers and educational support staff, Bernie told them they were, “the conscience of America,” and said, “You are demanding, and I am demanding, a change in national priorities.”  This what Sen. Sanders means when he calls for a political revolution against the billionaire class.

Bernie Sanders is right.  The striking educators are right.  And together we can remake the school system—and our society—to meet the needs of everyone.

Please join me in voting for Bernie and building the social movements we need for transformational change.

Co-editor of Teaching for Black Lives

One thought on “Why as a Black high School teacher I’m endorsing Bernie Sanders: The campaign to “fix the hole in the soul of America.””