At a Martin Luther King Day protests this year I was assaulted by a Seattle police officer who pepper sprayed me in the face as I was on the phone with my mom, arranging plans for her to pick me up and take me to my son’s two-year-old birthday party. That day was deeply painful, and not only because of the burning in my ears, nostrils, and swollen eyes. What hurt the most was fear that I brought to my two sons who were deeply troubled watching me writhe in pain and pour milk on face to try to sooth the burning.

While I thought the worst of the emotional trauma was behind me, the news I received last week deeply injured me for a second time.

We finally found out that the officer who pepper sprayed me was Sandra Delafuente. An investigation by authorities sustained findings of unauthorized use of force and improper use of pepper spray against me and recommended that the officer be suspended for one day. But what really burned me is that the Chief of the Seattle Police, Kathleen O’Toole, agreed with the misconduct findings, but  intervened to down grade the discipline to merely an oral reprimand.

I called a press conference to address this miscarriage of justice and was joined by City Councilmember Kshama Sawant, Councilmember Nick Licata, Black Lives Matter activist Nikkita Oliver, and Social Equality Educators board member Roberta Lindaman. Together we all made the case for real accountability for police — especially since the Seattle police department is under a federal consent decree after an investigation by the Department of Justice found officers routinely used excessive force and evidence of targeting people of color and biased policing.

After the press conference, I had the opportunity to address the Seattle City Council at a meeting they were holding to hear Chief O’Toole’s request for expanding the budget of the police department. I entered the Council Chambers and took a seat in the front row and looked to my right to see the Chief of Police sitting at the end of the row. When my name was called during the public testimony period, I didn’t want to get up. I knew those in power would not like the questions I planned to ask, and I have to admit I was scared.  Breaking through the fear, I managed to stand up and walk to the podium.  Looking up at the city’s elected officials I asked,

“Why [did] police Chief O’Toole downgrade the discipline for the officer who assaulted me? Why weren’t you all informed about her decision?…The larger question is: If our citizens who have definitive proof of police misconduct on video can’t get justice, then who can?” 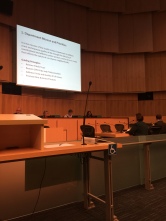 It is the mission of the Seattle Police Department to address crime and improve quality of life through the delivery of constitutional and effective police services, and to do so in a way that reflects the values of our diverse neighborhoods.

I’ll let you read the following accounts in the media of what happened to me and Chief O’Toole’s response and decide for yourself if her actions in my case are fulfilling her mission:

TheStranger.com (blog) – ‎Oct 8, 2015‎
“My question for the council today is why police Chief O’Toole downgraded the discipline for the officer who assaulted me,” Hagopian said. “Why weren’t you all informed about her decision? He added: “The larger question is: If our citizens who have …

The Seattle Times – ‎Oct 8, 2015‎
“If somebody as well-known and well-respected as Jesse Hagopian receives this kind of treatment at the hands of police and is still waiting for justice, then I would want us to think about the kind of chilling effect this would have on other community …

Seattle Weekly – ‎Oct 8, 2015‎
The pepper spraying occurred on January 19th, as Garfield High School teacher Jesse Hagopian (whose previous involvement with the #BlackLivesMatter movement you can read about here) was returning home after addressing thousands of Martin Luther …

Amid calls to fire officer over pepper spray incident, SPD chief calls her ‘a …

KIRO Seattle – ‎Oct 8, 2015‎
The man who was pepper-sprayed is Jesse Hagopian, a prominent teacher and activist. “The searing pain is difficult to get out of my head,” Hagopian said. He had just given a speech during a Martin Luther King Day rally in January, when he says his …

Mere weeks after the Whitlach firing, though, O’Toole is under fire for recommending a lighter punishment for Officer Sandy Delafuente who was filmed pepper spraying Garfield High School teacher Jesse Hagopian at a Black Lives Matter demonstration.