Educators are walking out of the public schools in Seattle on Tuesday,

Moreover, Washington State voters have approved I-1351 which would reduce class size around the state, yet the legislature is preparing to ignore that law.  To make matters worse, the Washington State Legislature is getting ready to take an 11% raise, even while educators have had their voter approved cost of living adjustment revoked for the past six years, and now only offer educators a 1.8% increase.

The Real News Network covers the rolling strike wave across Washington State in this special segment: 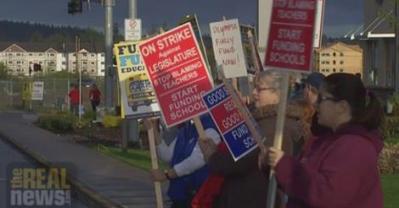 DHARNA NOOR, PRODUCER, TRNN: Welcome to The Real News Network. I’m Dharna Noor joining you from Baltimore.Thousands of public school teachers went on strikes across nine Washington State school districts on Wednesday. These single-day strikes are part of a protest against the new state budget proposal. The teachers, who are members of a union called the Washington Education Association, are demanding smaller class sizes, better compensation, and less testing. Teachers of other districts are set to strike this Friday.Joining us from Seattle to discuss these strikes is Jesse Hagopian. Jesse teaches history and is also the black student union advisor at Garfield High School, where teachers just voted to join the strike. Jesse is an associate editor of the acclaimed magazine Rethinking Schools. He’s also a founding member of Social Equality Educators. He blogs at I’mAnEducator.com and is the editor of More than a Score: The New Uprising Against High-Stakes Testing.

[See the rest of the transcript here]

2 thoughts on “Seattle Educators Set To Strike For The Schools Our Children Deserve: Video interview with Jesse Hagopian on the rolling strike wave in Washington State”